One of the most important parenting skills I’ve learnt, and one which seems obvious and yet is so often and so easily missed, is that of validating a child’s feelings.  And not just when we agree with them or we think they’re valid.

If we stop to listen to ourselves it’s quite remarkable how often children are told how they should or shouldn’t feel.

“Why don’t you play on the slide?  You love the slide.”

“You’re fine, it was only a little bump.”

“It doesn’t matter. Why are you making such a fuss?”

Yet children want to know we’re on their side, and that we understand.  It’s often counter-intuitive.  Parents worry that by validating their child’s feelings they’ll make them more upset.  It’s instinctive in many of us to tell a child with a grazed knee that they’re fine, it’s not badly hurt, in an attempt to comfort and reassure them.  Then we start to get annoyed when the wailing continues, and insult their feelings further with attempts at distraction.  If these work, the result is that the child misses the opportunity to release their feelings, and instead, learns to suppress them.  If they don’t work, some parents will start resorting to bribes or threats  to quieten the child down, sending the additional message that their feelings are not valid, and certainly not understood, and that it’s not OK to cry. 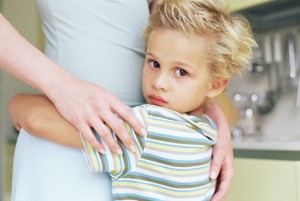 I find it’s better to simply share their pain with them, and give comfort through understanding.  “You were having so much fun, and now you’ve hurt your knee and it’s really upset you.  Poor you, you have a good cry and a cuddle.”  This also enables a child to release all their feelings so they can then get over it and move on.  It may lead to more crying, sometimes about something else they’ve had pent up for a while, but it’s better out than in!

Naomi Aldort writes in her book, “Raising Our Children, Raising Ourselves“, “Validation and focussed listening are our way of making it safe for the child to express herself; it is our way of offering love and intimate friendship.  The result of such validation is that the child feels safe to feel her feelings and to express herself fully…….. Children whose feelings and experiences are validated may cry more or they may become angrier precisely because your validation gives them permission to express their deepest feelings.  Once the are done, however, they often move on with no residue of bad feelings. ”

There are numerous other examples of when children’s feelings should be, and often are not, validated.

Replacing “Your new nursery is going to be so much fun, there’s nothing to worry about…”, with “It must feel strange going to a new place. You don’t really know what it’s going to be like” reassures the child that you understand how they might be feeling, and is more likely to get them to talk to you about their concerns, giving you more opportunity to alleviate them.

Replacing “You’re being really silly, stop this right now or we’re not going to the park” with “It’s not much fun for you in the supermarket is it, and it’s frustrating for you that you can’t play with these things.  Try to be patient just a little longer and I’ll be as quick as I can” is actually more likely to bring about cooperation, and heads off resentment, putting you both on the same side instead of into a power struggle.

Replacing “Stop making that silly noise and come upstairs for your bath right now” with “You were having fun playing and you don’t want to come for your bath. It’s frustrating when you have to stop doing something you enjoy.  Come here for a cuddle” is again, much more effective, and builds a much better relationship.

Replacing “It’s just an old piece of string, we can get another one” with “You had fun playing with the string and you feel really sad that it’s lost” is validating something that may seem unimportant and even ridiculous to you, but at that moment is important to the child. If you let them have a cry about it, they’re more likely to release the upset and move on, possibly to a new piece of string.

Sometimes I’m surprised at how well validation works, especially when I often find myself having to say the opposite to what I’m thinking.  But it does work, it is important, and is essential to a good parent/child relationship.

This entry was posted on Thursday, September 8th, 2011 at 11:23 am and is filed under Connection; being an attuned parent. You can follow any responses to this entry through the RSS 2.0 feed. You can leave a response, or trackback from your own site.