To the woman sitting at the next table to us at the leisure centre yesterday:

My child is a bad loser. He gets very upset if he doesn’t win. At anything. I know this, so I was prepared for a lot of fuss if he didn’t win a prize in the raffle. I knew what responses I needed to give, and I knew the poor responses I can sometimes give when I’m out of patience, so I’d mentally prepared myself for the storm to come. 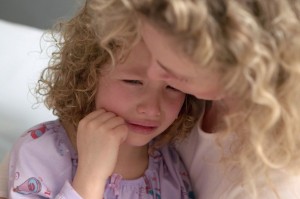 You may think he was making a lot of fuss about nothing, and that by failing to tell him so, I was encouraging this. But it wasn’t nothing to him. If I’d said, “Don’t be so silly, stop making such a fuss” would this have made him feel any differently? Would he have said, “OK, actually you’re right Mum, I’ll stop crying now and forget about it”? Really? I don’t think so. So I validated his feelings – it’s nice to feel someone understands and is on your side when you’re feeling upset isn’t it?

You may think I should have corrected his unreasonable claims that he never wins anything. But in the midst of that upset the rational part of his brain wasn’t functioning – my reasoning would only have fallen on deaf ears. He was merely expressing how he felt at that moment.

You may think his behaviour was bad behaviour that needed to be punished or corrected. But I don’t see it that way. He was expressing his feelings, that’s all. They’re his feelings and he’s entitled to them, and I can’t make them go away. He was not pretending to be upset. He was. I wish he wouldn’t get so upset about these things, but he does.  Since he can’t really help how he feels, to punish him would only teach him to suppress, not deal with, his feelings, and that the way he feels makes him a bad person.

You may think I should have tried to cheer up or distract him instead of just allowing him to cry for so long. But this too would only brush his feelings under the carpet. If I had scolded or distracted him and stopped the crying sooner, this may have been desirable for me, it may have made me feel better, but it would have short-circuited my child’s ability to really deal with his feelings. The best way for him to learn to deal with these upsets, to develop the maturity and emotional intelligence we often wish children had, is to experience them fully. Then move on, in his own time. And you know what? That’s exactly what he did. Outside, in the car park, the bit you didn’t see. He dried his eyes, sighed, and starting talking happily about something else. He never mentioned it again. He didn’t even feel the need to tell his Dad about it when we got home.

You may think this was proof that he wasn’t really upset – a common misconception about children. They experience things very much in the moment you see. They can swing from one extreme of emotion to another very rapidly. He was very upset at that time, he is not yet able to regulate his emotions, but as he was allowed to express and feel this upset, this enabled him to fully get over it and move on, And that’s what he needs to learn to do. In the meantime, I just need to be patient and be there for him. A loving, accepting presence.

So if you were surprised or puzzled by my responses to my child, I hope this explains where I’m coming from. The responses may have seemed unusual to you since sadly, as a society, we have for many years misunderstood children’s developmental needs, and change is slow in coming about. Old responses and assumptions get passed down from one generation to the next, and it’s difficult to break that cycle. But even though my approach goes against the way I was brought up, and can attract the attention of strangers, I’m completely confident that it’s the right thing to do, and the right thing for my child.

This entry was posted on Monday, April 28th, 2014 at 1:54 pm and is filed under Connection; being an attuned parent. You can follow any responses to this entry through the RSS 2.0 feed. You can leave a response, or trackback from your own site.

One Response to Bad loser