Settling in to childcare

I have recently expressed some concern to other parents about what I consider to be rather inadequate settling in arrangements at my child’s new school.  At the time I was slightly surprised by their reaction – one of total unconcern, trust in the school’s system, and attitude of getting it over and done with as quickly as possible, but in hindsight this doesn’t surprise me at all.

It recalls the time when I  attempted to start my child at a playgroup that took 2 1/2 year olds. The settling in arrangements were non-existent;  the intake was not staggered either in terms of starting days or times, and the parents were not encouraged to stay with their child, in fact they were encouraged and advised to leave immediately.  This was following just one visit for each child with their parent to the playgroup which had taken place three months prior to their starting date.  Yet, to my knowledge, every single parent went along with this, trusting to the assumed higher wisdom and experience of the playgroup staff, and ignoring all their own parental instincts, dismissing these, in line with the attitude of the staff, as just unfounded concerns of over-anxious parents finding it hard to let go for the first time.

This approach somewhat ignores the substantial body of research and evidence out there that suggests that young children, particularly under 3s, need access to an attachment figure in order to feel safe and secure.  Clearly no such attachment figure is present when a child is separated from their parent and left in an unfamiliar environment with a bunch of strangers.  Richard Bowlby, President of the Centre for Child Mental Health writes in his article, Stress in Daycare;  “Being unable to access an attachment figure during non-parental daycare can result in babies and toddlers experiencing stress and elevated cortisol levels”.  Again, a substantial body of research and evidence has shown the long lasting negative effects of abnormal levels of the stress hormone, cortisol, on a young child’s brain development. 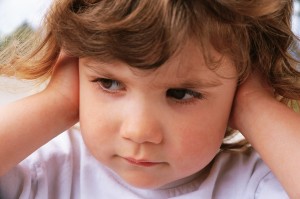 The argument I repeatedly hear from people who work in childcare settings is that the child stops crying once the parent is gone.  This, many seem to believe, shows that the child was only pretending to be upset in a manipulative attempt to prevent the parent from leaving.  Not so.  Whilst it is quite normal and healthy for a child to express some sadness at parting from the parent, then move on once the parting is over, this does not make it OK to leave a child with a stranger.  The child may stop crying once the parent has gone, but this does not necessarily mean they’re OK.  It is more likely that, with no attachment figure present, they no longer feel safe enough to express their feelings, so they suppress them, to burst back out once the parent returns – parents often report difficult and challenging behaviour on collecting their child from childcare.  The problem here is that all the time the child is in this situation, hiding their feelings of fear, insecurity, and anxiety, their cortisol levels are going sky-high.  Furthermore, this type of approach will do nothing to help the child feel secure and happy on subsequent visits to the childcare setting, but only increase their resistance against such an experience, and prolong their feelings of stress and upset.  Things may be ‘over and done with’ quicker for the parent, but not for the child.  Yes, the child will settle eventually, but is this really the best way for them?

If parents just took the time to make more visits or stay with their child until they have become familiar with the environment and the people in it,  it would be so much less stressful for the child,  and so much better for their relationship with their child.  Furthermore, this investment at the beginning may seem more time-consuming and ‘drawn out’, but in fact will result in fewer tears (from both parent and child!) and a quicker settling in overall.  Yes, all children are different, and some children will settle much quicker than others.  The parent, as ever, is the best judge of this.  Don’t just ‘go with the flow’ – that is the pressure from other parents, and from childcare workers.  Read the facts on attachment, and trust your own instincts.