I fairly recently came across this term in a newspaper article and must admit I liked it.  I might be a bit slow – maybe it’s been around for a long time already – but I’ve never heard anyone use it, or seen it before. I think perhaps it’s used more in the States.

However, I more recently read part of a forum thread on Mumsnet in which someone had asked what the term meant.  Answers ranged from parents who are constantly phoning their son or daughter’s university to complain about something or argue about grades, to parents who follow their child up into the structures at soft play centres.  I felt slightly affronted by this latter example.  I have frequently been seen at the top of soft play structures.  Do people think I’m a helicopter parent?! (actually, it was always either climb into the structure with child or put up with him doing some helicoptering of his own – around me at my table with my unread magazine).

So I guess the term can be whatever you interpret it to be.

I think the first thing that comes to my mind is over-protective parents.  Not just in terms protecting children from physical harm, but also wanting to protect them from, well, everything.  Parents who are constantly stepping in and interfering with children’s play – trying to settle all their differences for them, trying to direct the play too much, not just letting them get on with it.  Of course, younger children especially, often do need the help of an adult, but often they don’t.

Lawrence Cohen, Ph.D. gives some excellent tips on when and how it may be necessary to step in, in his book, “Playful Parenting“. He also quotes Jeffrey Trawick-Smith;

“Children need to get into arguments to learn how to resolve them; they must be excluded from groups to learn play group entry skills. They must play with disagreeable peers and bullies to broaden their repertoire of social strategies. They must have play ideas rejected so they can learn to become persuasive. When adults intervene too quickly in conflict, these opportunities are lost.”

I think this type of over-protectiveness stems from our, well, protectiveness; a natural feeling for a parent to have towards their child.  But I think it also comes from a lack of faith in children’s abilities, and often in their intentions.

But as well as basic over-protectiveness, the term ‘helicopter parenting’ also brings to my mind a type of parenting that seeks to exert what I see as excessive control over a child.  Maybe it’s a genuine wish to keep them from physical harm, but often I suspect it’s more about keeping them clean, for example, or just quiet. I am frequently in a situation where I hear other children being told not to do something that I am allowing my child to do.  Play fighting and wrestling is the most common, but also things like climbing on a wall, having a pillow fight, splashing in puddles, walking through or playing with mud, piling bark chippings on the bottom of the slide (I actually take some secret pleasure in allowing my child to do this and pretending not to notice the the disgust on the face of the mother of the little girl in the pretty white dress at the top of the slide).  I make no apology.  Children’s business is to play. They learn through play, explore the world through play, learn to be safe through taking risks, find their limits. 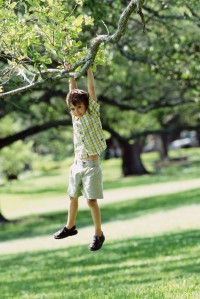 On the safety issue, Cohen writes;

“Children have very good judgement when they are allowed to use it, but often they haven’t gotten much of a chance, since we are always telling them what they should or shouldn’t do. Most of us worry much more about danger than we need to, especially if we are going to be right there playing with them…..Of course, as parents, part of our job is to pay attention to basic safety, but sometimes we use safety as a good excuse for our own insecurities and inhibitions.”