I’ve been noticing a fair bit of stuff in the press lately about how today’s children don’t get outdoors enough, and spend too much time in front of screens or in scheduled activities. There has even been a phrase coined for this phenomenon –  ‘Nature Deficit Disorder‘ –  for which the National Trust blame the increase in gadgets and traffic, and to which they attribute the rise in obesity and mental health problems amongst children.

All very depressing, but what really caught my attention was this article about the Playing Out Project in Bristol, where two mothers sought and gained permission from the local council to close their street to traffic at an agreed time to allow the children to play out on it. The project is now spreading across Bristol and elsewhere. The benefits of this type of play discussed in the article were to me both obvious and a revelation at the same time. 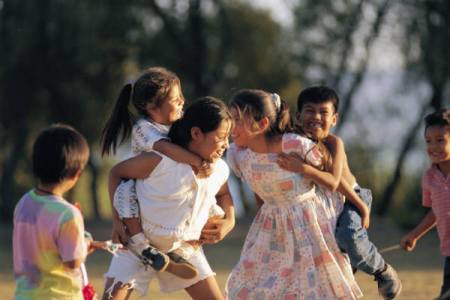 Sure, I remember some great days out, some great family holidays. But the bulk of what really defines my childhood memories are those of just playing out, with my friends, in my village. Favourite hiding places, favourite trees, favourite games. Roaming the village and surrounding woods and fields, unchaperoned by adults. I don’t make this latter point because we took the opportunity to get up to mischief (not that we were perfect either), but because the absence of adults gave us a certain autonomy. We were free to express ourselves, to play games without fear of disapproval or ridicule, to get lost in our own children’s world without the self-consciousness of knowing adults were watching and listening. We climbed trees, made dens, strayed in and out of each other’s houses and gardens, went in search of conkers or blackberries, but most of all played all sorts of make-believe games, sometimes just two of us, sometimes quite complex, organised games with larger groups of mixed ages.

Now, having a child of my own but living in a large city, I’m lucky again to live on a no-through road where the kids play out regularly. My child doesn’t have as much freedom as I did, but reading about the Playing Out Project made me appreciate that the little freedom he does have – being able to step outside his own front door unchaperoned, and play freely on his own street – is an unusually large amount, at least for kids who live in urban areas. And just as I have always taken my own childhood experience for granted, so I have been taking my child’s for granted now. Free range childhoods have become something in danger of extinction, something to be campaigned for and saved.

But what has really dawned on me is that it’s not just about loss of exercise, fresh air, or knowing that apples grow on trees. It’s about the loss of free play. Unsupervised, unorganised, unscheduled free play. It’s not just about getting outdoors, it’s about free range, unobserved, unstructured, spontaneous, creative, imaginative, cooperative play.

A constant source of admiration and wonder for me is just how long the kids can and will play out, with no adult supervision or organised activities, but with just their own initiative and imagination. They make use of whatever materials happen to be available. There have been Saturdays this summer when my child has played out on the street from 10am to 5.30pm, just coming in briefly for lunch. What does he do out there all this time? Sure, the adults facilitate the play to some extent, providing chalk, scooters, balls, and materials to create a messy play area, although even this was not originally intended for the kids, they just made it theirs. But often they’ll just create. Last weekend they spent a good deal of time playing with an empty wheelie bin, for example. Sometimes they come in requesting specific materials to further their ideas. My child came in the other day and asked for a rucksack and an umbrella because he was ‘going camping’. I provided the requested items then watched with interest through the window while he and his friends all trekked with their backpacks 25 metres down the road then stopped to ‘set up camp’ with old blankets, and sat there for some time pretending to read magazines and newspapers under their umbrellas.

This is real play. This is what those kids the National Trust talk about are really missing out on. In real play they learn teamwork, cooperation, negotiation, how to be inclusive, how to share, how to deal with disagreements and fall outs, how to put their ideas forward, how to handle rejection, how to interact with others, how to socialise. The list is endless. And kids need space to do all this. Not just physical space, but space of their own, that they can organise and control themselves, not be subject to the organisation and control of adults.

Kids don’t need to just get out to the park, out on a walk, or some other adult organised and chaperoned activity, but out, on their own, in their own neighbourhoods, on a regular basis. Let’s get behind the campaign for free range childhoods, for reclaiming the streets, for getting kids away from screens and back into the creative, imaginative play that kids do best. The nature of free range play is unique and worth fighting to preserve.

For more on the movement for free range kids, kids play and childhood generally see: