Free play isn’t just beneficial or important, it’s essential. It allows children the opportunity to learn by exploring the world around them, to use their imaginations and creativity, and to develop social skills and emotional resilience through their interactions with other children.

But in order for children to reap the rewards of free play, adults need to know how to facilitate it. There are the obvious things like placing restrictions on screen time, and not over-scheduling our children’s lives into organised, adult-led activities. But there are also the less obvious things.

Here are some of my suggestions.

Let sleeping dogs lie. Let happy children play. Whether playing alone or with other children, if they’re busy, leave them be whenever possible. Very young children will develop their ability to focus on things for longer. Older children engrossed in a game clearly don’t need our input. If we have something we want them to do, can it wait until later? Be flexible.

My child never does anything I suggest. He will go out of his way not to. Everything must be done his way. I think he’s a bit of a chronic case, but the principle still holds: children like to come up with their own ideas and invent their own games. We need to trust in their ability to do this.

Having said this, I do sometimes subtly leave things lying around that I think my child might play with when he sees them. Often I keep packaging like bubble wrap, polystyrene, or cardboard boxes. Once I gave my child and his friends some carpet off-cuts. But I didn’t make any suggestions as to what they should do with them….

Free play means free of adult direction. Butt out. Let the children make up their own games, their own rules, and come up with their own solutions to problems. They can do it! Occasionally an adult does need to intervene, especially where younger children are involved. Perhaps the children need reminding to make sure everyone gets a turn, perhaps feelings are running high and a situation needs defusing. But give them the chance to resolve things on their own first. Every time we step in we deprive kids of the opportunity to exercise their judgement, their ability to come up with ideas, to manage conflict, and to just, well, play on their own, which is kind of the whole point.

Allow some risk taking. Children will only learn to manage risk by experiencing some level of risk. Again, we need to trust them to use their judgement, and use ours a little more when it comes to deciding if it’s really necessary to step in or to restrict something. Our risk-averse culture prompts us to step in far too often.

Allow play fighting. Whether wrestling or playing with pretend weapons, we really need to get over it. It’s normal. Trying to ban it is a mistake. Wrestling kids probably will take the occasional bump, but it’s unlikely to lead to death or hospitalisation. Remind them of some basic rules if you must, like no biting or kicking. Observe the play closely. As long as both children are happy, both are willing participants, and the stronger child is holding back some strength, then all is as it should be.

Allow kids to get dirty

When we dress ourselves in the morning we choose our clothes based on what we’re planning to do that day. Don’t we? So if we’re going to do some decorating or gardening we don’t put on our best suit or dress.

Kids are probably planning to play most days. So dress them for it, and don’t stress about it when they get dirty. More importantly don’t project your stress about it onto your child. Children need to be free to explore and have fun uninhibited by concerns over their clothes or appearance. This is childhood. Adulthood comes later.

“The very existence of youth is due in part to the necessity for play; the animal does not play because he is young, he has a period of youth because he must play.” Karl Groos

Should we let our children play with guns?

Every parent of boys knows it.  They want to play with guns.  You just can’t stop them.  They’ll make guns out of sticks,  lego, bananas, anything really.  Distasteful to adults, do we try to stop it, forbid it, or just go with it?

Before I had a child I would probably have said, forbid it.  Now, I’m not so sure.  After all, they’re just playing.  What’s distasteful to adults is just a bit of harmless fun to a child.  It’s distasteful to us, because we understand what real guns are for, and what death is.  A young child doesn’t.  So my issues with attempting to prevent this type of play are:

1. We are attempting to force our adult perceptions on a child.  Just because we don’t like guns, doesn’t seem to me a good reason to attempt to stop what is clearly quite normal behaviour.  Boys have been playing with guns for centuries.  As long as no-one’s getting hurt, what’s the problem?  I think it’s a bit of a leap to assume that allowing them to play with guns is going to lead to them becoming involved in gun crime later in life.

2. I believe making something forbidden can increase its value in the eyes of a child. Whilst I don’t necessarily want to try to discourage my child from playing with guns, neither do I want to encourage it, and trying to forbid it could well back fire (no pun intended).

3. Children’s play is telling us something.  They express themselves through play, work out issues they have.  Trying to suppress a child’s instincts never works.

Having said all this, I have not yet succumbed to buying a toy gun for my child, but he can imagine all he likes with sticks etc.

Lawrence Cohen, Ph.D., author of Playful Parenting, writes “Pretend guns (the kind you make with your finger or a cardboard tube or a stick) allow children to create games and rules and play out the themes important to them…….On the other hand, toy guns, especially realistic ones, tend to restrict children into playing in very limited ways.” 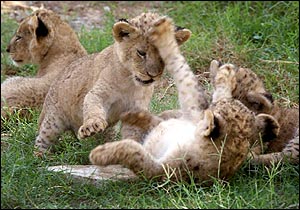 Of course, guns are not the only type of aggressive play that boys, and girls too, often like to engage in. Wrestling and play fighting is also common, and another area parents often seem uncomfortable with, either because they don’t recognise it as play, don’t like the idea of fighting being allowed – another example of our adult perceptions being applied, or they’re worried someone will get hurt.  I actually really enjoy watching this type of play as children seem to enjoy it so much, and it seems so natural.  It always makes me think of nature programmes on TV showing tiger or bear cubs play fighting.  OK, sometimes someone might end up taking a bit of a bump, but I’ve never seen anyone get seriously hurt.

So are we being over protective?  I think if we watch carefully enough we can learn to quickly distinguish between real and play fighting, and to know when an adult needs to step in if things are getting out of hand.  Too often I think we step in unnecessarily.

Cohen writes of this type of play “They aren’t just practising aggression, they are practising restraint and control as well.”  I think children would really be missing out on some important developmental needs if they were forbidden this type of play. If we’re really worried about it we can always join in!

Cohen goes on to write “I don’t believe you can or should ban all aggressive play. Children need to come to terms with aggression – their own and others’ – and if we don’t let them do it through play, they will do it in real life…..Good creative play….does not make children violent, no matter what kinds of aggressive games they are playing.”

This was first published as a guest post on Free Your Parenting.