It would seem bad enough that today’s children have to suffer from the results of an increasingly narrow curriculum and pressure to perform due to government targets and testing. But it also seems that this doesn’t stop at performance targets. Attendance is apparently also under scrutiny, with ridiculous advice published in my child’s school newsletter this month.

‘The school’s average attendance rates have recently slipped from 97% to 96.9%’, we are told. ‘We need to do better.’ Suggestions for how this may be achieved include;

‘If your child is feeling a bit under the weather, send them in and let us know. In our experience, they can often get a second wind and, if they can’t manage the day, we will call you and let you pick them up.’ 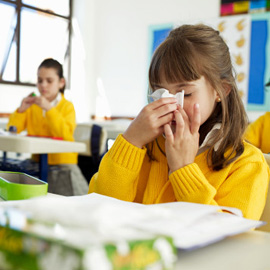 In my experience, as his mother, I think I am best placed to judge whether or not it is best for him to attend school on a given day. Why would we want kids that are possibly unwell going into school and potentially spreading their illness to other kids anyway? How will that increase attendance? This advice makes no sense to me at all.

Just as testing contributes only to the school’s performance targets, and are of no benefit to the children, this approach is not in any way beneficial to my child. It’s all about targets. As usual.

Please don’t patronise me. I am well aware of how many non-teaching days there are, and I’m sure the school is equally aware of the price difference of holidays during these 175 days compared to other days in the year, although they conveniently omit to acknowledge this here. For many, there’s also the small matter of when they are able to get time off from their work.

Finally (and this is the best bit) we are told, ‘We will be introducing new special recognition certificates this term for children who have 100% attendance this year.’

Now, if you’ve read some of my other blogs posts, you will already know how I feel about reward systems. So I’ll try not to say too much on this particular subject. But just to point out the basics; any reward system has a flip side. It’s all very nice for the children who receive the reward, but it effectively punishes those children who do not. That may not be the intended outcome, but it is the outcome nonetheless. It’s that simple. And how is it OK to punish a child for having been ill, for coming from a disadvantaged or complex background, for taking days off for religious observance, or for the decision of their parents to take them on a term-time holiday? (I don’t know many children who get to decide on the dates of family holidays).

What exactly is such a reward system supposed to achieve? Is it supposed to encourage children to come to school when they’re ill? To stop having a disability? To cease to observe religious events? To nag their parents not to book a term-time holiday? To help resolve any number of social, domestic or other issues that may account for their lack of 100% attendance over a year? I’m really struggling with this.

A few statistics (since we’re so hung up on these):

A Department of Education report on pupil absence from schools in England found that illness was by far the most common reason for pupil absence. (around 59% compared to less than 10% for term time holidays).

Statistics have also shown that children on free school meals, or those with special educational needs, are around three times more likely to be persistently absent.

“There exists a growing number of parents with complex problems, often related to poverty and mental health. Their children are often those with poor attendance records.” says one headteacher in a Guardian article on ways to tackle poor attendance. A school Home Support Worker in the same article points out that, “Most of the mums I see whose children are persistent absentees are struggling with domestic violence, disability problems or debt.”

Furthermore, Department for Education guidance regarding The Equality Act 2010 states,

“Indirect discrimination occurs when a “provision, criterion or practice” is applied generally but has the effect of putting people with a particular characteristic at a disadvantage when compared to people without that characteristic.”

Given that children with disabilities or long term health problems, or children from a particular religious group will be at a clear disadvantage when it comes to the school’s reward system, I would suggest it could well be argued that said system is discriminatory and in breach of said Equality Act.

I get that schools are under pressure to achieve certain targets. I do. And I get that they need to encourage good attendance, and tackle poor attendance. But this fails to really tackle any underlying issues, and is surely not the way.